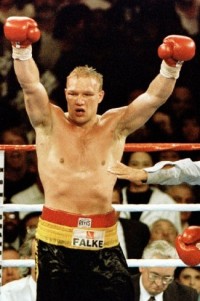 Schulz first fought for a world championship in 1995, when he challenged George Foreman for his IBF title. Schulz lost a very close majority decision, but was immediately granted a second opportunity at the title in the same year. With Foreman having vacated the title after refusing a rematch, Schulz faced Francois Botha but this time lost via (a controversial) split decision. However, Botha later failed a drug test, which led to Schulz receiving a third chance at the title. In 1996 he fought Michael Moorer for the vacant IBF title, losing again via split decision. During his career, Schulz also fought Jeremy Williams and former world champions Henry Akinwande and Wladimir Klitschko.From 1982 Schulz boxed for the army sports club Vorwärts in Frankfurt (Oder), later becoming the East German youth champion. From 1986 onward, he was a Stasi informer under the codename "Markus". At the junior European championships in Denmark in 1986, Schulz won the light-heavyweight title, and in 1988, under the tutelage of Manfred Wolke, he became East German heavyweight champion. In 1989 he won the Chemiepokal in Halle (Saale), the silver medal at European Championships in Athens, and a bronze medal in the world championships in Moscow, where he lost to Félix Savón.