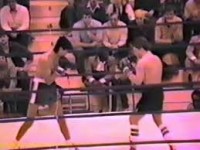 Perez was denounced to the Occupation authorities and arrested in Paris on September 21, 1943 and detained in the Drancy internment camp before being transported to the German extermination camp of Auschwitz where he was assigned to the Monowitz subcamp to serve as a slave laborer for I.G. Farben at the Buna-Werke. He was killed on January 21, 1945 on the death march from Monowitz to Gleiwitz.His life was made into the film Victor Young Perez in French and German (also known as "Surviving Auschwitz" or "Perez ha'tza'ir").